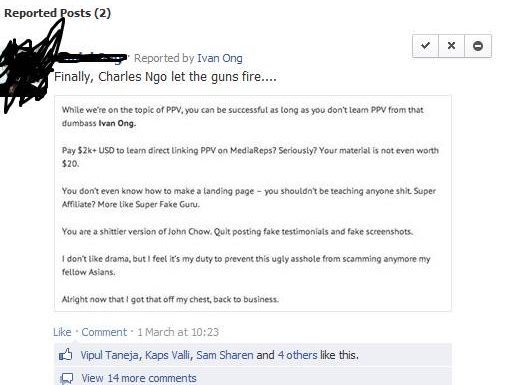 You are here: Home / Affiliate Marketing / My opinion about Charles Ngo`s and Ivan Ong`s posts

Hey guys if you visit CPA Blogs regularly you might have seen this post from Charles Ngo about Ivan`s PPV Coaching and ivan`s response here . I just wanted to share my opinion about both these people as many people asked me about my opinion once Charles posted about Ivan on his blog. In fact there were two posts made on my Facebook group as well which were reported by Ivan Ong but i decided not to take them down to keep a healthy discussion going on the group without any censorship .

Before continuing with this post i would like to say that i myself am coaching people about PPV. However being a blogger it is my responsibility to stay neutral and provide you with the facts and what i think about all this situation with all my honesty, and i not to favor any of them. I have never met any of them and both are well respect names in the industry; I have known Ivan for more then a year now and i am Charles `s loyal reader for years now also. But just because i coach too doesn’t mean i have the right to bash anyone else in the industry who is doing a good job. I waited for Ivan`s response and dust to settle before i published this post so that we have opinions from both sides.

First of all about Charles post, I asked and inquired through a friend who attended Ivan`s coaching and so far my conclusion is it is simple coaching, however i must admit he covers everything very well, even the small things. I would also say that this information can be found for free as well if you take some time and want to learn, the internet is huge and you can find out about anything you want. In fact when i started off i had no money to pay to any coach etc but i learned everything from free resources which helped me to get started! But that obviously took some time and i was able to make an initial income to get started. At that time i used to think there is a secret method or way which you can make big bucks, however later i realized the biggest secret in this industry is that there is no secret. In this prospective, Charles is right when we compare the price with the content provided.

I don`t agree with the price Ivan is charging (If i am not wrong $1997 ) but we should also keep in mind that he is charging for his own time and being a coach myself i do know how hard it is to manage your campaigns running as well as coach other affiliates as well. I personally coach a limited number of people per month and even that is sometimes hard for me to manage timings etc which is a tough job also Ivan`s argument is also valid that he doesn`t force people to join his coaching they do so by their own choice, and as far as i know through my friends in the Asia region, his students do make good money and all the testimonials are legit. Then again, there are also those who ended up making nothing at all. Also as far as i know he recommends his students starting out with direct linking, but as a second step he recommends them to use landing pages, In my opinion it is always better to start with landing pages or even more better if you rotate between landing pages and direct linking campaigns but in my experience landing pages always perform better.

To conclude , In my opinion both sides are right on their own place, The thing is we need to know the purpose of coaching. Why do you want coaching is the question. Lets understand this if you think by attending some ones coaching you will be millionaire that is impossible, The purpose of the coaching is to help you learn the ropes, A coach shares with you his own experience what he has learned so that you can avoid making same mistakes as him this way you can succeed early as compared with a person who starts his learning process himself , A coach`s job is to show you the way and show you how to deal with the things and the rest is on you… how you pick up things and learn. From my own experience when you start coaching for a fee they are more successful as compared to free coaching here is an example, I love the warriorforum as this is the place i started my affiliate marketing career from and i wanted to give back something to community. So in 2011 i offered 10 people free one on one coaching no strings attached. And the result was total waste of time out of 10 people one one took action … and that student is still making good money, And rest of them were free info seekers who just wasted my time and fled away.. After that i left everything and concentrated on my own business but soon enough i started receiving emails about coaching and few months later i started paid coaching but to limited numbers of people and the results were something new for me. I realized people who paid for the coaching were more serious and successful as compared to those who were free info seekers and that money i made form coaching surely helped and still helps to fuel my campaigns and increase my advertising budgets.

So weather you need a coach or not is totally up to you.. But in coaching if you are expecting some hidden secrets to be revealed that’s wrong instead you can also find same info from all over internet there are many forums out there on internet you can get help from. Affplaybook is a great forum or even warrior forum and Affiliate fix are great places or you can join My facebook Group or any other group or forum you can learn a lot form them but you only learn when you ask questions and on free groups,forums etc i have seen mainly people ask very basic questions which are already answered 1000 times and this is one of the reasons i don’t come online on any of the forums. On other hand in Paid forums usually members are those people who are much more serious about what they are doing so they are much more better places to learn. But if you need a person who can help you personally and advise you at the time this is the reason you should go and look for someone to coach you, but your success in your own hands if you take action and work hard you will succeed otherwise you won`t succeed. We can`t say Charles is wrong or Ivan is scammer because he is charging for his time and there is nothing wrong with that i do that as well.