Box of ads is a tool i always use and also recommend it to people looking for spy tools or those having difficulty with finding the perfect targets for their PPV Campaigns. Recently they have updated their Display tool which was launched a couple of months ago , With this new update Now Box of ads is no less then any other media buying competitive intelligence tools. In fact Box of Ads is much more cheaper in price and easy to use and much more detailed as compared to its competition. When i was informed about this new update by the Lukasz Jasiak i was very excited and started testing their new features . And they did n`t disappoint me at all ..

I started my test with searching for progressive.com into search bar and it turned out with the list of their advertising URLs and sub-domain . Being a scrapper BOA also scrapped some un related websites as well and on asking BOA team they told me they are working on it and will update once they fix it  ..   As seen in screenshot above the Spy tool displays information about three things, Display ads used by the advertiser or the banners, Text Ads and it shows list of publisher websites a website is being advertised on and finally the landing pages being used for the campaign. 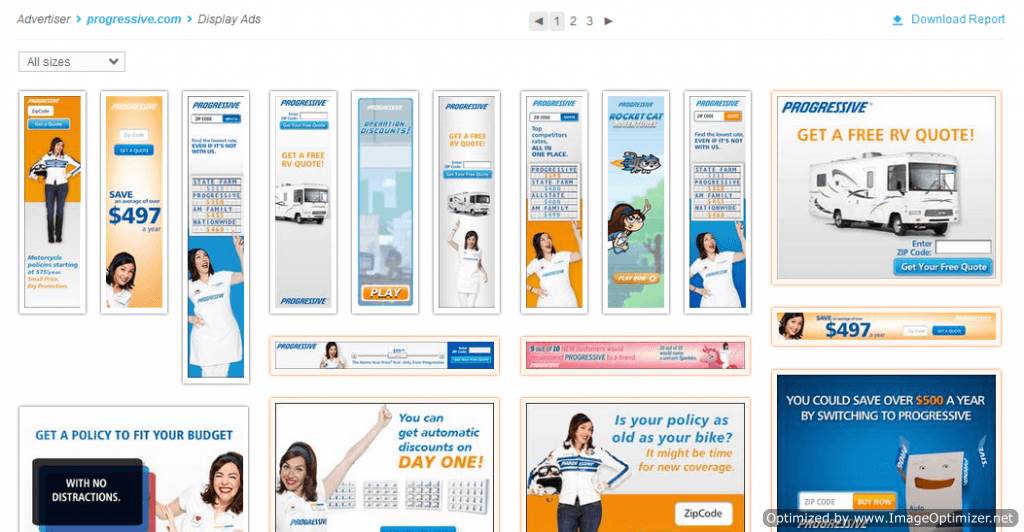 In display ads section, The tool will get all of the banners being used by the advertiser on his campaigns and also show its stats and how well this banner has been performing and where, on which website this banner was advertised as well. This way it provides a very detailed information about banners being used by an advertising and what kind of banners are being successful. With information about landing pages which were used as well as the countries most of traffic came from and top performing keywords for that banner . Which makes this tool a very powerful source for the media buyers where they can get info about what kind of banners their competition is using, What kind of website they are targeting as well as information about their landing pages also.

In Text ads section,The tools will scrape the text ads being advertised all over the internet and shows information about top publishers , top networks used to advertise text ad,Top 50 keywords ,Weekly trends with list of publishers  also including the number of clicks they generated as well as the landing pages used for the campaign and the number of clicks sent to that landing page.  Also this section shows they countries from where the advertiser is buying traffic most.  This is a great tool for the PPC advertisers as well as they can exactly know what kind ads their competition is running while showing about their ad copies, keywords , Traffic networks  and landing pages they use in fact this tool will get all the data related to your competition and put it in front of you ..

Over DISPLAY PRO is a great tool for not only Media buyers but also for the PPC advertisers and also PPV advertisers can take benefit from it as well and find a list of URLs of  the advertisers in their niche driving paid traffic . As compared to other Media Buying and PPC Spy tools Box Of Ads DISPLAY PRO is a much more cheaper solution and provides same information as other major tools in the industry . They are offering this amazing tool for only $147/month

$99 month with one month Free Trial  Click here to Avail